Croatia has reinvented itself with luxury suites and five-star services. They were able to overcome with extreme nonchalance the fact that they have only a few sand beaches and offer a sea that is always a bit cold: on luxurious Hvar they set up elegant platforms, with white mats, linen curtains and hot showers in front of the sea.


It is as if there was a sort of general agreement; any part of the coast, including the islands, has assumed a particular role, offering a spectrum of choices that fulfills the needs of any traveler.

Queen of glamor, littered with paparazzi lurking at the exit of the bars or on small boats, Hvar (Lesina in Italian) is the coolest of the Dalmatian islands. Because here in the deep blue sea and the bays scented with lavender and rosemary are added to nightlife most interesting DJ-sets and the most exclusive parties of the Croatian coast. That is not an island like others you can tell already approaching the ferry to the port of Hvar.

Hvar has an interesting history that has resulted in a diverse range of cultural buildings and attractions. There is a broad range of sightseeing and things to do from swimming in the cerulean blue waters, strolling the promenade at dusk in Hvar Town, to sampling Croatian wine at one of the island’s vineyards or savouring fresh seafood at a harbourside restaurant.

Hvar Town is the busiest destination with a pretty harbour, busy nightlife and attractions including the St Stephen’s Cathedral overlooking the main square, the Franciscan Monastery and Fortica Španjola, a historic fortress dominating the town from above.

Close to Hvar Town, the Pakleni Islands are a lovely escape with clear water, pebbly coves and secluded beaches – drop anchor at Vinogradisce Bay or Palmižana on the island of Sveti Klement (St Klement). After a day of diving (Croatia has a vast number of shipwrecks, many protected under the Ministry of Culture), visit the botanical garden heady with the scents of salt-dusted rosemary, eucalyptus and mimosa before dining at either Zori Restaurant or Toto’s Beach Restaurant, both with exceptional sea views and fresh seafood to make any island castaway envious. 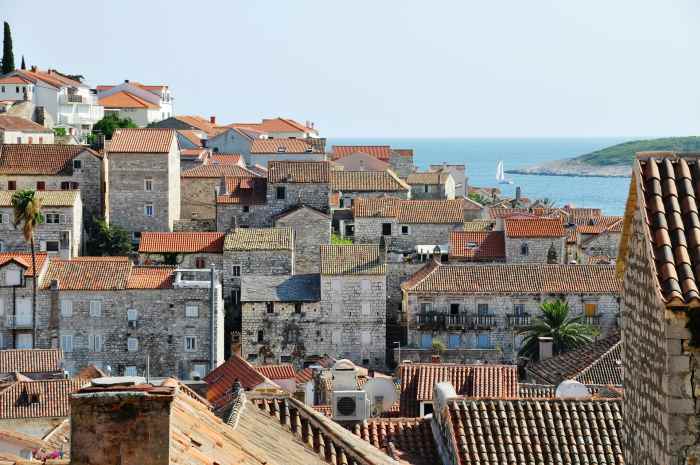 Among the sunniest Adriatic islands, Hvar is cloaked by a fragrant sheet of lavender and also other wild herbs. The spotlight of this long, wiry area is Hvar Town. You can easily discover why Hvar Town is the summer getaway preferred by Croatia’s cognoscenti. The enchanting old center, filled with Venetian buildings, sweeps around a large Adriatic bay. High up above, a rambling fort scrutinizes over the summer time landscape of sidewalk cafés,  restaurants and bobbing tour boats. The principal square is controlled by the magnificent shape of St Stephen’s Cathedral.

You should definitely pop in here if you are fortunate enough to catch the door opening hours which are unpredictable and limited. The 16th- century Renaissance building stands on the site of an old Benedictine monastery. The massive Renaissance façade appears in a good relation with the beautiful 17th-century bell tower. An earlier church was demolished by Turkish intruders in 1571, forcing the building of this Venetian-style cathedral. The cathedral treasury is exhibited in the nearby Bishop’s Palace.

Hvar what to do

Along the route to Split is almost inevitable to notice a luxury yacht that is heading to the nearby island. On board, there may be local millionaires, but even celebrities like Bill Gates and Roman Abramovich, Bernie Ecclestone and Steven Spielberg. Characters who have long since entered this island on the list of favorite destinations.

They dock at the marina and offer bystanders the spectacle of their boats. By day they relax, keeping away from the crowd of ordinary mortals who flock to the offices of the ferry Jadrolinija, and at night on their houseboats organize parties that a few hours later become the subject of discussion in the cafes overlooking the harbor.

The stunning town of Stari Grad on the Dalmatian island of Hvar, which this year is celebrating its 2,400th anniversary of its foundation, has been nominated for the European Best Destination 2017 title.

The heritage of Stari Grad has been preserved since the Age of Antiquity and has been recognized by UNESCO which in 2008 inscribed the Stari Grad Plain on the World Heritage List.

The city was founded on the western part of the plain by the Greeks who sailed from the island of Paros in 384 B. C. and who found a perfect place for a new life at the end of the long bay, with a fertile field and springs of drinking water lying behind it. Today Stari Grad is a popular tourist destination in Croatia.

Clubbing below the fortress

Every so often, though, the VIPs come down to earth in disguise or pre-alerting photographers, to win the covers of tabloids. Here were seen Brad Pitt and Jack Nicholson, Sean Connery and the Beckhams.

Frequented by the stars and backpackers alike, Hvar has something for everyone. It’s as tranquil as it is loud, as unassuming as it is flash – you’re as likely to see an old Croatian man sputtering up the hill in a vintage Lada as you are an oligarch popping bottles on his yacht. So, whether you want to soak up some history, dance until the sun comes up (and then goes back down again) or simply frolic in the ocean, Hvar – like the rogue sibling of the French Riveria – is the place to do it.

There’s no shortage of places to party in Hvar and Carpe Diem Beach is probably the island’s most famous spot, with international DJs regularly playing sets there throughout the summer. Whether you want a day party, sunset party after-dark party (or all three) this beach club – open until 5AM – has got you covered. Drinks are reasonably priced and entry is free during the day, but be prepared to pay a fee once the sun goes down.

Like Carpe Diem Beach, Hula Hula Beach Bar is famous for its Ibiza-style beach parties. Grab a margarita and lounger and bathe under the Croatian sun until around 5PM where the sunset party kicks off. For a more low-key beach bar experience, head down the bay for a few minutes until you reach Falko Bar where you can drink wine under the palm trees or clamber over the rocks into the ocean.

First or later almost everyone is sipping a cocktail at Carpe Diem, the most famous restaurant and bar on the Croatian coast. And watching the spectacle of Hvar by night, lights, sounds and adrenaline in a unique setting, carved by the Venetians from 1278 with the construction of crenelated walls, towers, and palaces. 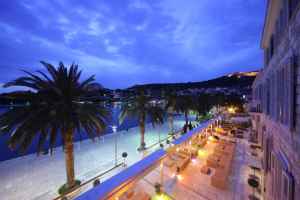 This waterside boutique hotel offers artfully fashioned rooms in the heart of Hvar Town’s lively nightlife. Its terrace restaurant is one of the coolest in town. 4-minute walk from the beach. This boutique hotel is located on the most popular promenade in Hvar and offers views of the bustling Hvar yacht harbour. Its’ designer air-conditioned rooms take inspiration from the Hollywood glamourous lifestyle. WiFi is included free of charge. More information…

Located a 5-minute walk from the beach and the historical centre of Hvar, Adriana Hvar Spa Hotel offers a spa, a rooftop terrace with an indoor seawater swimming pool and a a retractable roof, as well as a sky bar that provides panoramic views of the Cathedral, the Piazza and the bay. Wi-Fi Internet service is available free of charge in all rooms and hotel facilities. More information… 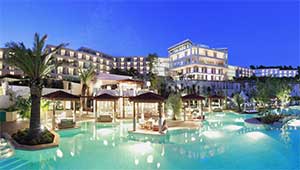 Situated on a secluded bay, this luxury hotel is located near a beach and features a multi-level pool. Sea views are the highlight here and Hvar’s centre is only a 10-minute walk away. On the nearby exclusive Bonj les bains Beach, guests can rent a private seaside cabin and enjoy a soothing massage.

Cocktails are served on the stylish lounge area or the poolside Cascades Restaurant, with its two-level terrace. The Amfora Hvar’s pool is filled with freshwater. More information…

This quiet, family-run hotel is a 20-minute stroll along the coast from town and set in beautiful surroundings. Request a room with a balcony, if possible facing the sea. Spa facilities include an outdoor pool. 2 minutes walk from the beach. Located in a quiet and secluded bay with a private beach surrounded by palms and pine trees. More information…

Rovinj – a star in Istria